Why A Swim Cap For African American Hair Matters: A Personal Story 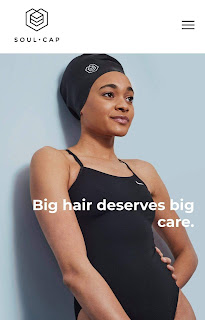 H ere's a short personal story on why a swim cap matters. When we were very young, about ages 7 and 9, my sister and I nearly drowned trying to reach our stepdad, who was standing far out at the deep end of the ocean on the Atlantic side of a Panamanian beach. So eventually, our parents decided to put us in Red Cross swimming classes on our military base. Let me tell you what that meant.  It meant that unlike girls who didn't have Black hair, we had to wear swim caps. Our hair, even with expensive French perms (which  were awful to suffer through btw) braided, and wearing adult women's swim caps, were a headache-induing tight fit. So in order to learn how to swim, we had to endure swim cap-induced headaches. My sister eventually dropped the courses. I improved swimming elsewhere, in lakes and rivers, the result being my returning home  from my summer forest service job with my hair badly damaged and sun bleached a brownish red. It sent my mom into fits, and would take her m
1 comment
Read more

Erasure By Colorism and Respectability Politics 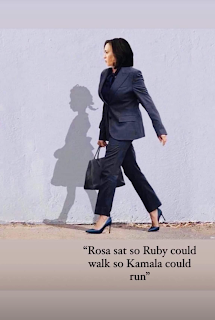 I don't know why it always falls to me to say these things but: 1. The McDonogh Three: Leona Tate, Tessie Prevost, and Gail Etienne, integrated New Orleans public schools with Ruby Bridges. 2. As romantic as the words on this image of Ruby Bridges' shadow being cast by Vice President elect Kamala Harris (Rosa sat so Ruby could walk so Kamala could run) may seem, Ruby walked before Rosa sat. And  3. Claudette Colvin sat before Rosa Parks, who worked for the NAACP at the time. Colvin's courageous act of defiance was erased from history and Parks volunteered to reenact it because Claudette was a teenager who was darker skinned with 4c hair and at the time also pregnant and therefore as far as the NAACP was concerned, failed both the brown paper bag respectability tests. 4. So basically if folks insist on this much poetic license, the words should read, "Ruby and the McDonogh Three walked, so Claudette could sit and Rosa with the" good hair and fair skin" coul
Post a Comment
Read more 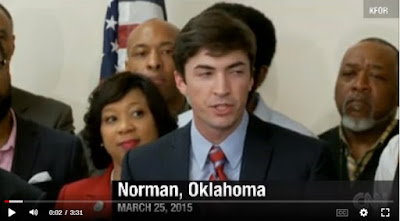 The  University of Oklahoma Sigma Alpha Epsilon racism incident , known as  "SAE-OU racist chant incident"  occurred on March 7, 2015, when members of the  University of Oklahoma  (OU) chapter of  Sigma Alpha Epsilon  (SAE) were filmed performing a racially insensitive song that used the word [redacted], referenced  lynching , and implied that black students shall be denied admission into the fraternity. After a video of the incident was published, the SAE's OU chapter was closed and two of its members, Levi Pettit and Parker Rice(the latter of whom was the ‘leader’ of the chant in the video), expelled.   - Wikipedia Image of Levi Pettit a white male in a dark suit and blue shirt and red, white, and blue tie, ensuring he is in close proximity  to Black community leaders in power, issuing a public apology  for his part in the SAE racist chant incident. Screenshot from Source KFOR The SAE racist chant incident stands out for reasons not commonly discussed. One
Post a Comment
Read more

Strange Fruit   By Abel Meeropol  Pen Name Lewis Allan Southern trees bear strange fruit, Blood on the leaves and blood at the root, Black bodies swinging in the southern breeze, Strange fruit hanging from the poplar trees. Pastoral scene of the gallant south, The bulging eyes and the twisted mouth, Scent of magnolias, sweet and fresh, Then the sudden smell of burning flesh. Here is fruit for the crows to pluck, For the rain to gather, for the wind to suck, For the sun to rot, for the trees to drop, Here is a strange and bitter crop. I was reflecting on how far expanded and removed International Jazz Day is from the roots of Jazz and its role in Black culture. My mind has been on one song and particularly all the women of color who sang it in protest of acts of violence against our people. Jazz day keeps colliding with my thoughts about the Equal Justice Initiative's  Lynching in America project and the memorial museum dedicated to its victims. Strange Fruit
Post a Comment
Read more

#DrivingWhileBlack Will "Road Rage" Be the New Lynching? 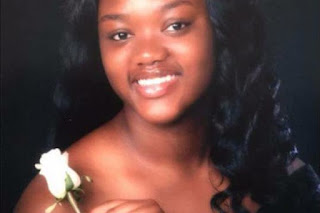 Image of Bianca Roberson, a beautiful female presenting African -American teen with long wavy black hair, smiling. She is holding a white rose bud Image Credit from GoFundMe Yesterday, Chester County Police announced that 18-year-old Bianca Nikol Roberson was shot in the head by a white man driving a pickup truck. Her body was discovered by police on Wednesday. They are calling it a horrific act of road rage. The West Goshem Township Police Department has released a screenshot of the suspect's truck from traffic camera footage. The suspect is still at large. A fundraising page has been opened to help the family with burial costs: https://www.gofundme.com/please-help-support-the-family?pc=tw_dn_cpgntopnavlarge_r&rcid=r01-14988364472-b6da4a5ba9614c58 Nabra Hassanen, a vibrant beautiful teen of color wearing a beige hijab laughing with a friend a Snapchat crown of flowers around her head. On Sunday June 17th, Nabra Hassanen was walking home from an IHOP  sa
Post a Comment
Read more 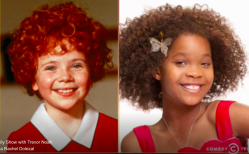 The character "Annie" portrayed by white and  Black actresses credit The Daily Show  Rachel Dolezal is the end product of hundred of years of cultural appropriation that is commonplace in nearly every aspect of our lives. Not only is she being allowed to continue profiting from assuming an entire Black identity (now she's published a book), but she goes further by appropriating an African name and appropriating the term 'trans' and hyphenating our race to justify a lifetime of fetishizing and appropriating our entire culture. Not satisfied, she is now claiming to be an expert on racial fluidity, thus perverting that as well. When racial fluidity is Googled, articles about her are at the top of the search results. This is the absolute definition of white privilege in action. Dolezal is trying to revive her career by self-identifying as 'trans-black.' Some claim she is an indicator of the world moving to racial fluidity. Nope! My multiracial children
Post a Comment
Read more

AP Stylebook: On Writing As Activism

AP Stylebook 2016 Cover A ny multi-media attack system perfected by extreme groups for the deconstruction of critical institutions, civil rights movements, and fact-based news includes a massive propaganda war that begins with the perversion of a term or phrase, or the rebranding of extremist ideas with new and unfamiliar terms and phrases meant to normalize radical concepts. The introduction of the term "alt-right" by   American Neo-nazi leadership was one such attempt. That attempt, off to a great start when journalists rushed to interview any pro-Trump supporting faction in the wake of the 2016 election slowed down significantly when the AP Stylebook defined and set firm usage standards of the term, and by doing so, slowed the attempted normalization of white supremacist propaganda machine efforts to push their own political agenda into the language of mainstream media. This literally brought equilibrium back in professional journalistic coverage of white nationalism
Post a Comment
Read more
More posts